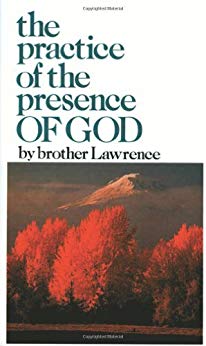 The Practice of the Presence of God, by Brother Lawerence, Kindle edition. The text was originally written and compiled in 1692.

Timing is everything, at least that’s what the ubiquitous “they” supposedly say. In this case, I’d have to agree. The time was right for me to read The Practice of the Presence of God. I know that the time was right because, at almost any other time, I would have found it too mystic for my general sensibilities. However, these times are uncertain, and for the duration of this season and its fallout, I have a strong impression that Brother Lawrence’s admonition to purposefully focus on God will be the key to enduring whatever comes next.

Before I offer my overall impressions and brief excerpts, a little background may be in order for readers who are unfamiliar with this book, or with Brother Lawerence. From a brief biographical piece by Christianity Today:

[Brother Lawerence] was assigned to the monastery kitchen where, amidst the tedious chores of cooking and cleaning at the constant bidding of his superiors, he developed his rule of spirituality and work. In his Maxims, Lawrence writes, “Men invent means and methods of coming at God’s love, they learn rules and set up devices to remind them of that love, and it seems like a world of trouble to bring oneself into the consciousness of God’s presence. Yet it might be so simple. Is it not quicker and easier just to do our common business wholly for the love of him?”

For Brother Lawrence, “common business,” no matter how mundane or routine, was the medium of God’s love. The issue was not the sacredness or worldly status of the task but the motivation behind it. “Nor is it needful that we should have great things to do. . . We can do little things for God; I turn the cake that is frying on the pan for love of him, and that done, if there is nothing else to call me, I prostrate myself in worship before him, who has given me grace to work; afterwards I rise happier than a king. It is enough for me to pick up but a straw from the ground for the love of God.”

Brother Lawerence’s peace and communion with God became so well regarded that many people sought him out for spiritual guidance.

When I first started reading the book, my stoic, sola Scriptura mind was not entirely receptive. I’m not a Calvinist, but I see some of the merits in Reformed Theology, and one of them is the wholesale condemnation of relying too much on our feelings at the expense of the written word of God. I actually put this book aside for a bit to ruminate before picking it back up. It’s a short book, however, so once I went back to it in the wake of current events, it spoke to me in a fresh way. I realized that what Brother Lawerence referred to was not a contradiction of the Scripture, but was in effect a result of hiding the logos in my heart.

After getting past my initial reservations about the mysticism, and reconciling the veracity of Brother Lawerence’s recorded experiences and admonitions with the truth of Scripture, I was challenged with contemplating whether what Lawerence described is even realistic for a busy wife and mother with a busy life and days filled with lots people, places, and things to do:

Thus, I resolved to give my all for God’s all. After having given myself wholly to God that he might take away my sin, I renounced, for the love of God, everything that was not God, and I began to live as if there was none but God and I in the world.

Nevertheless, I have come around to the conclusion that Brother Lawerence’s single-hearted devotion to remembering and focusing on the fact that God is always with us, and that Christ, the hope of glory, is indeed in us, is a truth within the grasp of each and everyone who is a believer. Is it a challenge? He admits as much:

I found a great deal of pain in this exercise, and yet I continued it even in the midst of all the difficulties that occurred, trying not to trouble myself or get angry when my mind had wandered involuntarily. I made this my business throughout the entire day in addition to my appointed times of prayer.

At all times, every hour, every minute, even at my busiest times, I drove away from my mind everything that was capable of interrupting my thought of God.

This has been my practice since the first days I entered into religion. Though I have done it imperfectly, I have found great advantages in this practice. I am aware, however, that all of these advantages are to be attributed to the mercy and goodness of God, because we can do nothing without him—especially me!

What is good is almost never easy to acquire, and while few of us postmoderns may ever reach the heights of spiritual fulfillment Lawerence described, we can, by God’s grace, achieve more than we have to date.

As far as the writing goes, the structure of the book lends itself to a bit of repetitiveness. Because these are mostly letters written by Brother Lawerence to various fellow Christian travelers to whom he is offering spiritual encouragement, this is to be expected. Lawerence had found the key to living at peace in a tumultuous world and rather than coming up with new or novel things to say to his friends, he continued to share with them what worked. Repetitiveness is often a very good thing, especially when are trying to internalize things that are particularly hard to internalize.

The biggest thing for me to embrace (and again, I don’t know if I ever fully will), is that despite my deeply flawed nature, I can have faith in God’s presence if I draw near to him rather than hide as Adam and Eve did:

I imagine myself as the most wretched of all, full of sores and sins, and one who has committed all sorts of crimes against his king. Felling a deep sorrow, I confess to him all of my sins, I ask his forgiveness, and I abandon myself into his hands so that he may do with me what he pleases.

This king, full of mercy and goodness, very far from chastening me, embraces me with love, invites me to feast at his table, serves me with his own hands, and gives me the key to his treasures. He converses with me, and takes delight in me, and treats me as if I were his favorite. This is how I imagine myself from time to time in his holy presence.

Timing is everything, and this was the right time for me to read this book. At no time is the reality of God’s presence more important than when we are facing the unknown and the reality that we are not as in control of our life’s trajectory as we imagined.

2 thoughts on “The Practice of the Presence of God”