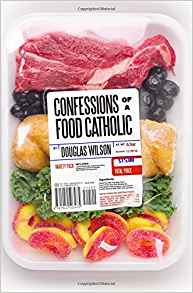 Confessions of a Food Catholic, by Doug Wilson. Published in 2016. 212 pages.

A friend loaned me this book to read and I was very interested to see what, exactly, it is all about. I wasn’t sure what Doug Wilson could possibly mean by the term “food catholic”, but eventually the idea became crystal clear.  If I had to summarize the general thesis of Confessions of a Food Catholic, I’d say it’s this:

The fact that the church has joined the world’s food fads, crusades, and trends has created a situation where the simple and joyful yet profound Christian experience of breaking bread with other believers is being tainted and hindered.

He argues that we all need to learn to accept what is set before us with thankfulness, and stop pretending that we are going to be irreparably damaged if we accept one dish of sweet Sister Jones’ homemade macaroni and cheese because “carbs” or “gluten” or “Monsanto” or whatever other excuse we can conjure up to resist being gracious towards our sisters and brothers in Christ. That is what I would describe as the thesis statement of Wilson’s book.

I agree with his overall thesis, but as is often the case when I read Doug Wilson’s writing, I ran into something that short-circuited his execution. I found his extensive insertion of caveats in the first three chapters problematic. In a world where almost nothing goes without saying anymore, I can appreciate the compulsion to say things like, “If you are deathly allergic to milk, I don’t expect you to risk your life eating sweet Sister Jones’ mac ‘n’ cheese in some misguided attempt at Christian unity”. What I don’t appreciate is feeling the need to say it over and over…and over again.

Thankfully, as the arguments unfolded and Wilson began to tackle the myriad individual food causes and crusades which have infiltrated the church world, the book gradually became much more pleasant to read. The secondary thesis, if you will, is almost as compelling as the first. I don’t necessarily agree with every assertion Wilson makes, but I do agree with this overall idea:

I am an active participant in my food chain, and I occupy a particular place in it. My moral duties are strongest right next to me, and they are weakest (to the extent they exist at all) at the far side of the food chain.

This is not to say that moral responsibility cannot be transmitted along the food chain. Surely it can, as when my buddy shoplifts something from Safeway so we can share it for dinner. Eating stolen goods that I watched get stolen is morally problematic, and I cheerfully grant it. But I am here talking about my supposed complicity in the strange oaths that the foreman in the Texas pecan orchard swore at his underpaid migrant workers, in the season before those pecans from said ranch made their way through thirteen other morally problematic checkpoints on their way to my pie. p.109

The numerous documentaries produced for the sole purpose of “informing: and inducing guilt into the American populace about the foods we eat has reached such a level of absurdity that even I, a girl who has to be careful about jumping on bandwagons, have learned to tune them out. I’m still a sucker for a good health fad, but I can no longer be bothered to bear guilt for Jose and Juanita’s suffering experienced on the tomato farms of South Florida.

I certainly believe that when we know better, that to the extent that we can, we should do better. I might be proving Wilson’s point here to a degree, but I don’t think it’s wise to ignore medical knowledge and advancements which offer information we can act on and to build on, especially in the areas of health and wellness. However, as Wilson aptly points out, every generation believes it has the lock on the truth about any number of things, and ours is no different. We should keep that im mind.

Touching on everything from our misguided expectation that a government which ushered corruption into the food industry should somehow fix it, to the ironic reality that the people who browbeat us the most about our food choices abhor our faith and values, Wilson offers a lot of food for thought here. He certainly opened up my thinking in ways that will help me to be a little more conscious of the areas in which I have raised food choices to the level of moral authority on par with The 10 Commandments.

Overall, it’s not a perfect book, but it is a worthwhile admonition.

6 thoughts on “Confessions of a Food Catholic”