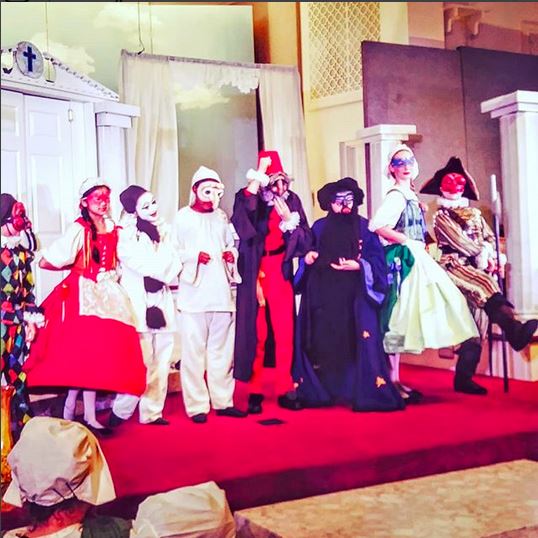 This is a busy week. Our children are performing in a Shakespeare production, we’re all stretched thin, and my mind is on Shakespearean things. Or at least on the reasons why Shakespeare is valuable, since we’re all working 10 hour days on limited sleep. I thought we’d discuss the things to be gained from studying the ancient works of Shakespeare in this postmodern year of Our Lord, 2019.

~ That you may ruminate: If there is one thing Shakespeare provides, it’s the opportunity to consider the complexities of human nature and conduct. There really is, to quote King Solomon, nothing new under the sun, and it’s usually a straight line between someone we know, perhaps ourselves, and a Shakespearean character’s foibles.

~ One man in his time plays many parts: Is there a better description of the many ages and stages of a single life? In a world of two-dimensional characters and one-dimensional depictions of a good life, Shakespeare offers a rich and full examination of the stages of life as well as their advantages and drawbacks.

~ I have no other reason but a woman’s reason: I actually do have a reason, but I like this quote from The Two Gentlemen of Verona because it illuminates my next point. Shakespeare is politically incorrect and brutally honest. On most subjects, perhaps because he was a man of his time, Shakespeare unapologetically expresses things as they are, not the way we wish a mysterious alternate reality fairy might make them.

~ They have been at a great feast of languages and stol’n the scraps“: So much of our modern language, its idioms, and axioms, are borne of ideas first penned by William Shakespeare. From “break the ice” to “love is blind” and “as good luck would have it”, our modern language is peppered with mainstays we borrowed from Shakespeare’s 16th Century writings. In our flash-in-the-pan culture, I’d say that’s pretty amazing. Only the Bible has had as much or more impact on our use of language. And oh yes, I’m aware that the quote that I used here is not quite in context. I couldn’t think of one more fitting and so…I turned it into scraps.

~Mine eyes smell onions: Lastly, Shakespeare is funny, if you can get the joke. This very obvious quip is from All’s Well that End’s Well when the duke excuses his emotional reaction to a touching scene by complaining that his eyes smell onions. A lot of Shakespeare’s humor is what as known as “blue comedy”,  but even those jokes are insightful and tinged with truths about human nature.

Those are five of my favorite reasons why it’s worth the time and intellectual investment required to read some of the works of William Shakespeare.

Feel free to add your own observations to the list, and Happy Friday!