Thanksgiving is just two days away, and like many of my readers, I am in the kitchen doing make ahead food prep. Recently, I was thinking of books that would be great to read aloud with children who are at home from school this week or homeschool students who are doing far less than the typical school workload. Here are a few that we have enjoyed over the years. I’ll link to each one with its publisher’s blurb because, well, I don’t have time to exposit on them properly in my own words at the moment.

Squanto and the Miracle of Thanksgiving, by Eric Mataxas:

This entertaining and historical story shows that the actual hero of Thanksgiving was neither white nor Indian but God. In 1608, English traders came to Massachusetts and captured a twelve-year-old Indian, Squanto, and sold him into slavery. He was raised by Christians and taught faith in God. Ten years later he was sent home to America. Upon arrival, he learned an epidemic had wiped out his entire village. But God had plans for Squanto. God delivered a Thanksgiving miracle: an English-speaking Indian living in the exact place where the Pilgrims landed in a strange new world.

When most Americans think of the first Thanksgiving, they think of the Pilgrims and the Indians in New England in 1621. But fifty-six years before the Pilgrims celebrated, Spanish explorer Pedro Menendez arrived on the coast of Florida and founded the first North American city, St. Augustine.

As I noted before here, I fully recognize the validity and significance of the traditionally celebrated Thanksgiving event. As a native Floridian and Florida history buff, I happen to find this story fascinating.

The Berenstain Bears Give Thanks:

The Berenstain cubs act out the first Thanksgiving complete with costumes, props, and a full Thanksgiving feast. But will Sister Bear’s pet turkey play the part of dinner? The Berenstain Bears Give Thanks teaches how God provided for the pilgrims and reminds children of God’s many blessings.

An Old-Fashioned Thanksgiving, by Louisa May Alcott: 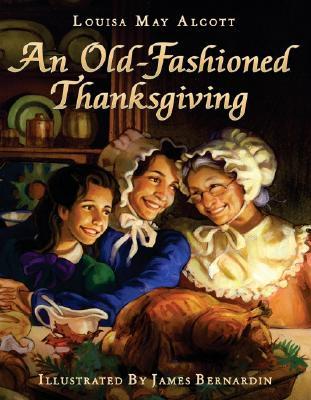 Thanksgiving morning is here, and the Bassett family’s cozy kitchen is filled with the hustle and bustle of the holiday. But this year something is different: Tilly, Prue, and their brothers and sisters have been left in charge of everything from the roasted turkey to the apple slump. They tie on their aprons and step into the kitchen, but are they really up for the challenge of cooking a Thanksgiving feast?

Feel free to offer some of your family’s favorite Thanksgiving books. It might include many that are not specifically written with children in mind.

One thought on “Thanksgiving Books for Kids”