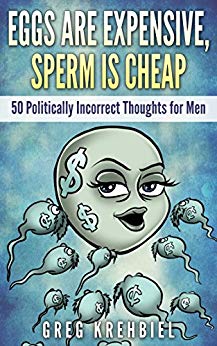 It just took me a grand total of one hour and 45 minutes to read this book, so it’s pretty short. I have heard the titular expression several times, but was unfamiliar with any book with this title. I learned of it after stumbling upon this article by Doug Wilson in which it was referenced. The book was far less expensive than eggs or sperm, and so I grabbed a cheap download and read it just a bit ago.

The basic premise, with which I fully agree, is that what our postmodern culture brands sexism is actually the recognition of human nature, common sense, and God-given sexual hard wiring for our survival and human flourishing. It’s a necessary good, and there is absolutely nothing wrong with pointing out that men and women are fundamentally different, thrive in different capacities, and are best served by the acknowledgment and acceptance of these realities.

There isn’t much more to it than that, broken down into 50 bullet point thoughts to organize the author’s points. The examples are worth considering; on everything from the privilege of male children in China to the “oppression” of women prior to 1920 when the 19th Amendment to the Constitution was passed. One example in particular that is worth considering is the ongoing fight for female equality in the armed forces:

Another example is warfare. If you understand the fundamental math (eggs are expensive and sperm is cheap) you understand why it makes perfect sense to have men fight the wars. Nature seems to understand that because it made the men physically equipped for the task. But somebody who is an absolute genius at spin has convinced us all that this very fact — that it’s the men who have to fight and die in war — is now seen as oppression of women. It’s almost hard to write something so transparently stupid, but that’s the way people think nowadays.

The modern lie has taken hold so completely that up to this moment you probably saw it that way. You probably saw the exclusion of women from various roles in the military as a left-over of pro-male prejudice. You may have thought, “Why can’t a woman go fight if she wants to?” And there you have the female imperative. “If she wants to.” The man might be drafted against his will and sent off to fight and die in a war a thousand miles away from everyone he loves for a cause he doesn’t believe in. But the woman gets to choose if she wants to fight, and the entire military structure has to be retooled and reorganized to accommodate her preference.

There is a lot to be said about the subject of this book, and unless any of us are willing to think critically, outside  the box, and consider another perspective if only as a thought experiment, no consensus will be reached. I didn’t agree with everything in the book. As is often the case when I read secular books on this subject, I like to see more credence given to the transcendent, even when I have no reason to expect such.

Krehbiel is far more right than wrong on all 50 of his counts, so it’s worth a read whether you’re male or female. The second half is mostly advice for men, but most of it -not all of it- was decent advice. I arrived at that conclusion from observing my own husband, not because of any inbred authority on the subject of manhood.

One thing is true, no matter what side of the argument you come down on. Mr Krehbiel is right absolutely about this:

The modern approach to sex doesn’t build a culture. It doesn’t harness the energy of the young man’s sex drive to make young men into responsible, useful members of society. It also fails to maximize women’s potential as wives and mothers. It is, in short, destroying civilized society. For the time being, our society is living off the borrowed capital of previous generations. A couple more generations of the modern way, and we’ll be in full-bore idiocracy.

This is a book that hits all the pertinent notes in a concise, no nonsense way and does it without being coarse or vulgar. Totally worth a read, even if all it does is make you think.

13 thoughts on “Eggs are expensive. Sperm is cheap”