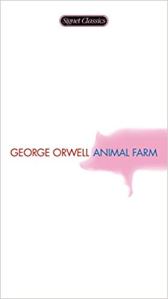 I read the book online for free at this link.

This is a book that hardly needs an introduction. Our language has erected an entire lexicon around ideas we describe as Orwellian. Of course, we most often hear that particular term, Orwellian, used in reference to circumstances that resemble the narrative Orwell unfolded in his famous novel 1984. Although the allegorical Animal Farm paints a different, equally somber picture of human corruption, cultural manipulation, political malfeasance, his use of animals universalized its presentation.

In fact, the reason I re-read this book over the weekend, several decades since I first encountered it in high school, is that our children are currently reading it as a literature class assignment. I am really looking forward to hearing how they process this story. In the highly unlikely chance that someone may not be familiar with the story of Animal Farm, we’ll start with a brief synopsis.

On Manor Farm, the animals live the way farm animals live. They fulfill their work to produce income for the farm’s owner, Mr. Jones, and they are fed food appropriate to their needs and species. Life is neither misery nor bliss. It simply is what it is: farm life.

Brewing inside the heart of Old Major, the oldest boar on the farm however, was a dream that one day, animals would throw off the yoke of oppression which humans used to bind them.

“Now, comrades, what is the nature of this life of ours? Let us face it: our lives are miserable, laborious, and short. We are born, we are given just so much food as will keep the breath in our bodies, and those of us who are capable of it are forced to work to the last atom of our strength; and the very instant that our usefulness has come to an end we are slaughtered with hideous cruelty. No animal in England knows the meaning of happiness or leisure after he is a year old. No animal in England is free. The life of an animal is misery and slavery: that is the plain truth.

“But is this simply part of the order of nature? Is it because this land of ours is so poor that it cannot afford a decent life to those who dwell upon it? No, comrades, a thousand times no! The soil of England is fertile, its climate is good, it is capable of affording food in abundance to an enormously greater number of animals than now inhabit it. This single farm of ours would support a dozen horses, twenty cows, hundreds of sheep–and all of them living in a comfort and a dignity that are now almost beyond our imagining. Why then do we continue in this miserable condition? Because nearly the whole of the produce of our labour is stolen from us by human beings. There, comrades, is the answer to all our problems. It is summed up in a single word–Man. Man is the only real enemy we have. Remove Man from the scene, and the root cause of hunger and overwork is abolished forever.

He didn’t expect to live to see or participate in the animal rebellion, and he didn’t. But before he died, he made a rousing speech complete with an animal national anthem, and the animals he left behind began to plan for the revolution which would one day come. In that day, all animals would be equal comrades, wealth would be shared equally, no animals would kill other animals, and Utopia will be realized.

When the opportunity presented itself the animals revolted, fought hard, and won their freedom. It wasn’t long however before their stated principles gave way to reality, unlike anything the more gullible animals had expected after their “freedom” was secured. The pigs, descendants of Old Major, were the cleverest of all the animals and it wasn’t long before the camaraderie gave way to hierarchy, with everything this implies.

Seeing as I read this entire book in roughly 2 hours, I’d say it’s worth your time to reacquaint yourself with this modern classic. It’s particularly relevant in our current cultural and political environment.

Orwell really was a masterful writer, and Animal Farm is a wonderful book.