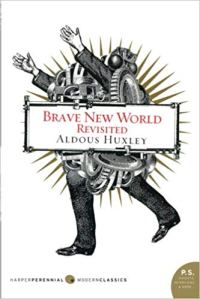 When his classic novel,  Brave New World, was published in 1931, Aldous Huxley’s imaginary world was one he foresaw unfolding many years into the future. It was set in the 26th century, in fact. By 1958 however, the world he saw emerging little more than a quarter of a century after his book was published seemed to be hurtling toward his very grim, sterile vision. And so, he penned a postscript: Brave New World Revisited. To offer some context, let’s do a short recap on the plot of Brave New World.

Brave New World, set in a futuristic age,  largely revolves around the World State city of London, 2540 AF (After Ford). In this well, brave new world, war has been eradicated, biological human reproduction has been replaced by hatcheries, the sexual revolution has come to full fruition with the destruction of the family, and the masses are kept happy through hedonistic indulgences and addiction to a drug known as soma. Life without struggle has been achieved.

Of course, there’s always a wrinkle waiting to tear at the fabric of utopias, and World State London is no exception. There are pockets of the world where religion still exists, the struggles of life go on, reproduction still happens the old-fashioned way, and the messiness of family life continues as it always has. This bit of reality eventually invades World State London, and things get interesting.

However, it’s the state of things in 1958 that motivates Huxley to revisit his fantastical Brave New World prophecies. In Brave New World revisited, we note Huxley’s alarm at the exploding post-war population. He notes the difficulty inherent in trying to control the reproductive habits of humanity and he is concerned about the ability of the world’s resources to sustain this increasing population of humans. Wherever I may diverge from Huxley on that particular subject, he offers a lot of highly instructive commentary which is relevant to life in the 21st century. On the subject of the masses being overly entertained:

“A society, most of whose members spend a great part of their time, not on the spot, not here and now and in the calculable future, but somewhere else, in the irrelevant other worlds of sport and soap opera, of mythology and metaphysical fantasy, will find it hard to resist the encroachments of those who would manipulate and control it.”

He touches on the banal danger of some of the most popular music of the times:

“Nonsense which it would be shameful for a reasonable being to write, speak or hear spoken can be sung or listened to by that same rational being with pleasure and even with a kind of intellectual conviction.”

On the subject of wresting  control of the masses via the carrot rather than the stick:

“In the light of what we have recently learned about animal behavior in general, and human behavior in particular, it has become clear that control through the punishment of undesirable behavior is less effective, in the long run, than control through the reinforcement of desirable behavior by rewards, and that government through terror works on the whole less well than government through the non-violent manipulation of the environment and of the thoughts and feelings of individual men, women and children.”

There were certainly areas of thought where I found Huxley’s arguments wanting, but none of that changed the fact that he made some excellent observations about the current state of his world and the ultimate trajectory of ours.

Revisiting Brave New World was a welcome opportunity to explore these ideas in a very short book, easily read over the course of a leisurely weekend. The real question lingers:

How close are we to Huxley’s Brave New World? Will we eventually live in a world so unfamiliar that even reproduction has been taken over by what Huxley refers to as the Power Elite?

As for the book, because it induces the opportunity to think about the world in which we live, I give it: