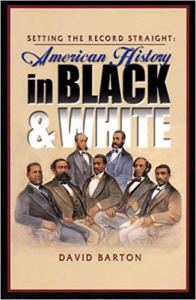 In this short book chronicling the political history and trajectory of black citizens in America, David Barton sets out to do exactly as its title implies: set the record straight. While Barton, a lay history expert who is highly regarded in Christian circles, has composed a book filled with valuable and often unknown information, I think he falls a little short of his goal when it comes to offering anything revelatory in a general sense.

I enjoyed many aspects of this book, which began its journey in 1787 and concluded with the 1964 Civil Rights Act and its political fallout. There were a few rabbit trails onto the subject of abortion, a foundational rail of democrat politics, and other religious conservative issues. These were distracting, but short enough as Barton seemed to quickly return to his primary subject matter. This is a good thing because there is a lot of unknown history relating to the numbers of black U.S. senators and representatives who were elected to Congress during Reconstruction. Many of the quotes from those men’s sermons and speeches are quite inspirational. I appreciated the thoroughly detailed sourcing Barton provided.

What bugged me as I read this book was an underlying assumption than ran through it from beginning to end.  Barton seems to be under the mistaken impression that most of his readers (regardless of race) are ignorant of the fact that up until the 1960s, most black Americans were registered Republicans although their votes were splitting nearly 50/50 from the time of the presidential election of FDR. Conversely, he seems to think most of his readers ignorant of the fact that the Democrat party, until the 1960s, was the party which supported slavery, segregation, and Jim Crow.

I will offer this in the author’s defense. Given the staggering amount of revisionist history, twisted narratives and oversimplification of political arguments as presented by most American media, it’s probably not a stretch to assume that very few Americans who are millennials or younger are aware of this information. The problem with this book is that repeatedly pointing out for over 100 pages that every piece of legislation supporting or contributing to the oppression of black people was initiated by the democrat party will do little to change the hearts or minds of people living in the here and now.

As I read through the book, I was torn between my appreciation of its compilation of records, quotes, and sources documenting the accomplishments and milestones of black American politicians in this country and the nagging sense that the entire purpose of the book was to get me to *see* something that I already knew. I wanted to like it, and there were portions of it that I liked a great deal. I simply would have liked it a lot more if there were fewer attempts to contrast the “evil” Democrat party with the “righteous” Republican Party. If this is a hard sell for someone like me, and I have nothing good to say in defense of the Democrat party, I couldn’t help but wonder how it would come across when read by someone more inclined to view the Democrat party favorably, as most black Americans are.

Barton, a devout Christian, does take the occasional moment to remind his reader that true hope and liberty will never be found in any political party, and I genuinely appreciated the quotes he offered from various theologians and Christian politcos asserting the same. For instance, this quote from Noah Webster was offered as a reminder of principles over party:

In selecting men for office, let principle be your guide. Regard not the particular sect [party] of the candidate- look to his character…It is alleged by men of loose principles or defective views of the subject that religion and morality are not necessary or important qualification for political stations. But the Scriptures teach a different doctrine. They direct [in Exodus 18:21] that rulers should be men “who rule in the fear of God, able men, such as fear God, men of truth, hating covetousness.”

The most glaring omission from the book is a needed exploration of how and why things changed so drastically in such a short period of time. Specifically, how we reached a point where black voters vote nearly monolithically, to the tune of 90% Democrat, despite the previously strong bond between the Republican party and black Americans in the fight for liberty and civil rights. Barton chooses to gloss over this by signaling LBJ’s signing the Civil Rights Act as the turning point, but the situation was far more complex, and longer in development than this seminal moment in 1964.

As is my custom, I decided I would interject a little bit of information here that would have been helpful had it been in this book. There is a relatively clear, if not necessarily clean path to view when trying to figure out the whys and wherefores of the black American exodus from the Republican Party to the Democrat Party. A very good exposition of the subject can be found at the blog Soul Therapy. In his post, How Blacks Became Democratic: The Myth of Republican Racism, “dathistoryguy” offers a much better understanding than most people are aware of. I highly recommend it for a more accurate, well-rounded perspective.

As for Setting the Record Straight? I’m rating it average for educational value, but only for those who can happily take in all the information and ignore the political demagoguery.

3 thoughts on “Setting the Record Straight”