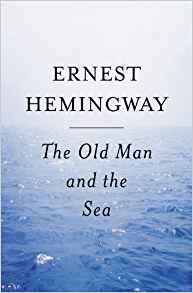 This weekend, I decided to read this short novel from Hemingway for a couple of reasons. The first is his poetic way of describing natural beauty, and the second is because this is a very short book, and I was guaranteed to finish it off in less than two days. It is a very satisfying man vs. nature novella.

Santiago is an old fisherman, once successful, who has experienced a long run of bad luck on the seas. For a time, the young boy Manolin was his apprentice fisherman, and caretaker on and off the boat. However, since Santiago has gone for so long without catching any fish, his parents forbid him from fishing with him any longer. They send him to apprentice with more successful fishermen.

Manolin obeys his parents, but his heart is still with old Santiago, and he checks in on the solitary fisherman every morning and every night. He makes sure that he eats, gets him his morning coffee, and they talk baseball. Both love Joe Dimaggio.

One morning Santiago heads out early, determined that it will be the day his luck turns around. He loads his skiff and sails out farther than he normally would, following the current and the birds overhead who seem to indicate a place where he’ll find a large school of fish.

The thing I love about this book, despite having zero experience with sailing, is the way the sea is almost a character all its own. This was something I noticed when reading The Lion’s Paw and Captains Courageous as well. Here, Hemingway contrasts the way older fishermen like Santiago and younger fishermen characterize the sea:

He [Santiago] always thought of the sea as la mar, which is what people call her in Spanish when they love her. Sometimes those who love her say bad things about of her but they are always said as though she were a woman. Some of the younger fishermen, those who used buoys as floats for their lines and had motorboats, bought when the shark livers had brought much money, spoke of her as el mar, which is masculine. They spoke of her as a contestant or a place or even an enemy. But the old man always thought of her as feminine and as something that gave or withheld great favours, and if she did wild or wicked things it was because she could not help them. The moon affects her as it does a woman, he thought. p.29-30

Leaving aside the political correctness or lack thereof in Hemingway’s description, it’s a poetically beautiful description of the sea which gives the reader a vivid picture of how much the old man loves her.

On the day when he goes far out to sea, his luck does indeed turn. He hooks a gigantic marlin, so large that it pulls him farther and farther out to sea. He holds on to marlin, suffering intense pain, hunger, and discomfort for two days. In the end…

You’ll just have to read it, which you can do for free right here. It’s so short that the only thing left is the ending, and I don’t want to spoil it for you!

One thought on “The Old Man and the Sea”