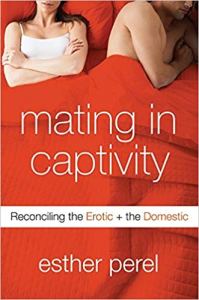 I decided to break this review up into several posts because, as with The Feminine Mystique and Modern Romance, the scope of ideas in the book are so wide-ranging I wanted offer a clear picture of what you’ll find within the book’s pages. Rather than removing the possibility of ever reading the book, in my own reading life I have found that such analyses propel my resolve to read the books for myself to better draw my own conclusions. Because of that, I have no qualms about doing chapter by chapter analyses of nonfiction books.

When considering my analysis, a few stipulations:

The introduction of the book lays the groundwork for what lies ahead. It’s a short explanation of the problem Perel is going to describe and then aim to solve:

Psychologists, sex therapists, and social observers have long grappled with the Gordian knot of how to reconcile sexuality and domesticity. p.xiii

In essence, Perel sets out to figure out why long term married couples (in aggregate) report a sharp decrease in desire for one another over time. She explores this by offering different examples of real life couples she has counseled over the years and the suggestions and homework she gave them which helped to reignite some of what they felt for one another in the beginning.

Being almost completely unfamiliar with this particular marital malaise, I am finding the book somewhat fascinating, even as I disagree with many of her bedrock assertions.

Chapter 1: From Adventure to Captivity

At some point, we can thoroughly address the whole notion of this “captivity” thing, but not quite yet. Chapter 1 begins with Perel describing the scene at a party for authors she attended several years ago. Different writers were mingling about with each other, sharing what types of books they were writing. When she shared that she was writing about, she was suddenly the star attraction.

Everyone in her vicinity had strong opinions and wanted to weigh in, with two distinct, caricaturish camps emerging; the romantics and the realists. The romantics“refuse a life without passion”, squared off versus the realists for whom “maturity prevails. The initial excitement grows into something else-deep love…diminishing desire is inescapable. You tough it out and grow up”.

Perel makes the case that our modern expectations of marriage are wildly out of proportion to anything out ancestors would have expected, and I agree with her. The demise of religion, long held traditions and community institutions (not to mention distances between extended families) have caused the majority of people to expect their spouse to replace everything that these support systems used to provide. She conversely asserts, and I agree, that deep love and desire are not mutually exclusive; that these can be maintained in the same relationship over time.

She rounds out the first chapter with a look at two of the couples she has counseled in her practice as an example of one of the things (I presume) she is going to use as a basis of foundation for her solution to the problem. Each of the couples entered territory where they sacrificed or hid parts of who they are for the sake of the whole, new entity they were creating as they merged their lives together. Perel asserts, and again, I partly agree, that a large part of the excitement of a new relationship is the unknown factor. The unpredictability and instability of a new relationship is the accelerant for the fire that ignites the desire.

At the beginning, she mistakenly calls this phenomena love, asserting that “love is inherently unstable”.  I disagree. Love isn’t inherently unstable. Real love is the most stable thing you can build any life on, the only thing really, and plenty of people experience the fire and excitement of desire without ever getting to love. Later, she reworks her terminology, correcting this earlier misstep of interchanging love for desire. It made for a much clearer communication of her points going forward.

She’s wrong to dismiss the need of sacrificing parts of oneself for the greater whole, but she’s absolutely right that being able to see our spouse as an individual, separate and distinct from us goes a long way to fight off the malaise that diminishes desire over time. There’s a lot more to unpack there, but not without quoting the whole book.

In this chapter, Perel expands on her preceding intimation about the need for separateness as a prerequisite for desire, using the example of a unmarried couple she saved by counseling the woman to move out, and how the shift re-ignited their relationship. As if often the case when Big T truth isn’t the foundation of counsel, we skip around the edges of truth just enough to sound good, but miss the heart of the matter. The thesis, if you will, of Chapter 2 is that when we become too enmeshed, we lose the ability to see our mate’s “otherness” enough to want them:

With too much distance, there can be no connection. But too much merging eradicates the separateness of two distinct individuals. There is nothing more to transcend, no bridge to walk on, no one to visit on the other side, no other internal world to enter. When people become fused-when two become one-connection can no longer happen. There is no one to connect with. p.25

Sigh. So much potential, so little Truth! Being a Christian, I am solidly and immovably in the camp of husband and wife being no longer two but one. Merging is a beautiful thing. Mrs. Perel got that part wrong. The intertwining of souls, however, doesn’t negate the reality that the differences between men and women, coupled with the reality of growth and change over time leaves us plenty of bridges to cross to one another as well as internal worlds to enter. The problem is that we often don’t want to do the work or experience the discomfort of crossing those bridges or even acknowledging the bridges.

Marriage as a destination rather than a journey is at the heart of a lack of desire is what Perel seems to be trying to get at, and she’s not wrong. That, and the tendency we have to set up our lives where we never have the opportunity to see our spouse’s otherness, to view them with new eyes, or outside of the context of very narrowly proscribed parameters.  Christians can be particularly susceptible to this tendency. When there are opportunities to see your mate within the context of the environments that intrigued and captivated you at the beginning of the relationship, desire can’t help but re-emerge.

This one has the makings of another one of those books that occasionally parks right alongside the curb of truth, but never makes it across the lawn to the front door.