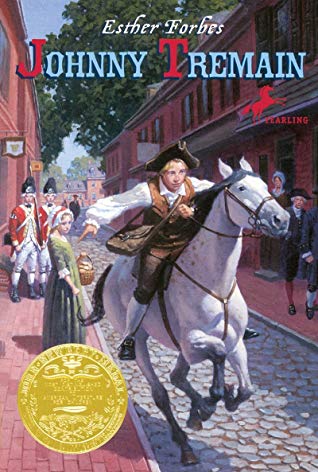 This is a historical novel set on the cusp of the American Revolution and is a good fit for middle grade readers, ages 10-13.

Johnny Tremain is a young and talented but arrogant orphan being apprenticed by a highly regarded but aging Boston silversmith. Mr. Lapham, Johnny’s master, has grown so frail and infirm that Johnny basically runs the silversmith shop. The Lapham women, comprised of Mr. Lapham’s widowed daughter-in-law and her three daughters, feed Johnny’s vanity, treating him like a king because of his extraordinary talent and because he is set to inherit the silversmith business which they all depend on for their livelihood. Mr. Lapham makes every effort to counsel Johnny in the ways of piety and humility, often to no avail.

While violating his master’s rule regarding not working on Sundays, Johnny severely injures his hand trying to fill a rush order for a wealthy client. Just like that, his entire life is turned upside down. He is turned away from the Laphams and the silversmith shop. He is no longer the heir apparent. After many struggles, he finds a new path and a new purpose as the American colonists ramp up their rebellion against the British crown and the Revolution gets underway.

I enjoy well written historical fiction, but this was the first one I’d read in a long time directed toward children. Esther Forbes does a really great job illuminating the different arguments, factions, and issues surrounding the break of the American coloniies as well as the turmoil that it brought upon major port cities such as Boston.

One of the things I enjoyed about Johnny was his wit and his rugged ability to rise to the occasion and survive no matter how rough things got. His understanding of the grave turn life had taken in Boston is revealed in a dialogue he shares with a young woman who belongs to a family loyal to the crown: