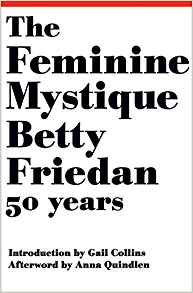 This is the 6th post in the series on The Feminine Mystique.

I’ve tired of Betty Friedan’s commentary, despite this book being on the list of books that helped shape America. Although I concede that she made a few valid arguments, this book grew increasingly redundant as it went on. I’m not sure if I’ll add any more posts to this series, mainly because the more I read, the more narrow Friedan’s analysis and study appears. I recognized early that her attempt to liberate “American women” had nothing to do with my mother or grandmothers for obvious reasons.

However, I now see it had very little to do with the mothers and grandmothers of my many friends from different backgrounds, ethnicities, and regions of this country. This book, as feminism has always done, speaks for a privileged and elite group of women. The fact that they propagandized their complaints well enough to trick the rest of us into believing that feminism was also about us does nothing to change the ultimate truth. Chapter 10, however, is an interesting one. It’s about a topic that interests me as well, so let’s explore it.

Mrs. Friedan discusses the ways which women -together with the educators, functionality experts and expert marketers- contrived to convert housekeeping from work that “can be capably handled by any eight-year-old child”, to a full-time occupation which takes 6 hours a day to complete. Friedan and one of her experts assert that the work is often incomplete by dinner  despite a wife working diligently all day to complete it:

But when the mystique of feminine fulfillment sent women back home again, housewifery had to expand into a full-time career. Sexual love and motherhood had to become all of life, had to use up, dispose of women’s creative energies. The very nature of family responsibility had to expand to take the place of responsibility to society. As this began to happen, each labor-saving appliance brought a labor-demanding elaboration of housework. Each scientific advance that might have freed women from the drudgery of cooking, cleaning, and washing, thereby giving her more time for other purposes, instead imposed new drudgery, until housework not only expanded to fill the time available, but could hardly be done in the available time. p. 286

Here, Friedan parks right alongside a good point. However, due to her adamance that a career was the answer to the disillusion women faced, she missed a valuable opportunity. Instead of denouncing the increasing materialism and isolation of suburban family life, she decided that what women really need is be more like men. Eight years ago a writer friend of mine took an excellent turn at expressing the problems that came with the increase of ‘labor saving” devices, the nuclear family as the center of life to the exclusion of broader community cohesiveness, with emphasis on the sexual domain as the sole purpose of a woman’s life. From her 2011 article, Return of the Washerwoman (link unavailable):

Yes, you have a washing machine in your basement, but you used to only have three changes of clothes per person, and many had their laundry washed for them. I know this for certain, as my aunt’s family used to run a laundry service and she swears that her family washed the laundry for the entire urban neighborhood. Women bought washing machines, which killed the washerwoman business, but then everyone’s wardrobes grew exponentially.

For all of the talk of “pioneer women”, they were a small minority of women and many tended to be dead before they hit 50. Most women 100 years ago were doing a similar level of housework and homeschooling as I am, but they didn’t have to take on the additional chauffeuring duties, they weren’t as isolated, and they weren’t expected to look like a lingerie model and turn tricks in the bedroom that would put some prostitutes to shame. The workdays were also shorter before cheap electric lighting and most people got more sleep.

In other words, Friedan was right about the evolution of the suburban housewife, and she was even right about the changing nature of the work women did in and around the home:

And yet, for the suburban and city housewife, the fact remains that more and more of the jobs that used to be performed in the home have been taken away: canning, baking bread, weaving cloth and making clothes, educating the young, nursing the sick, taking care of the aged. It is possible for women to reverse history- or kid themselves that they can reverse it-by baking their own bread, but the law doesn’t permit them to teach their own children at home, and few housewives would match their so-called generalist’s skills with the professional expertise of doctor and hospital to nurse a child through tonsillitis or pneumonia at home.

A lot has changed since this was written, as most of us can -many do- educate our children at home.  Even the brightest among us, however -and I know a lot of very bright women-find that we are helped immensely in that endeavor by educational support systems which include other women, a point which brings me to the overwhelming flaw in Mrs. Friedan’s conclusion. The flaw is assuming that being a housewife and contributing to the larger world are mutually exclusive endeavors.

Unfortunately, it’s also a trap that a lot of well meaning Christians mistakenly fall into, believing that we can bring back the good old days simply by doing things the ways our grandmothers did them in order to fill the days. Ask any woman who sews her own clothes how expensive it is to purchase high-quality woven fabrics and this notion is quickly disabused. Fortunately, it is possible to “be all you can be” as a woman without doing so on man’s terms nor pretending we can live a 1919 existence in 2019.

Life has provided me ample opportunities for intellectual stimulation,  to utilize my talents, and to contribute to society in ways I never imagined when I was a 23-year-old  housewife. I spent years living under the delusion that being at home might waste my talents. I realized early on that I could not have been more mistaken.

Mrs. Friedan’s assertion that the only way women contribute or exercise their potential is through careerism is wrong. The dissolution of community and the disappearance of engaged extended families has proven that her prescription, rather than freeing women, has only served to increase their burdens. Women who work, whether at subsistence jobs or in “fulfilling careers”, still have to endure the “drudgery” of housework. It’s just added on as a second shift, and they have to do it without much support.