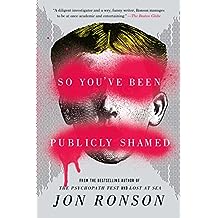 Before I get into the meat of this book, I decided to share one of my pet peeves to set the tone (consider yourselves warned):

I have an intense aversion to reading a news story on a “reputable” news site (NYT, FOX, NBC, etc.) and seeing random tweets from various Twitter users interspersed throughout the story. I’m perpetually confused as to why a “reputable” news outlet would lend gravitas to the rantings of random Internet commentators -fame does not impute authority, for the record-  as if their opinions have any bearing on the validity of the story being reported. This peeve is the context from which I began reading and begin reviewing So You’ve Been Publicly Shamed.

I consider Twitter a cesspool and enemy of critical thought, so it came as no surprise to me that Jon Ronson was able to compose a 300-page book comprised in large part of interviews with people whose lives have been tortured or careers torpedoed solely because a Twitter mob -or other Internet denizens- decided that one ill-advised stroke of their keyboards was worthy of public, worldwide, electronic excoriation.

Although Ronson begins with public shaming instigated online, he doesn’t stay parked there. There is a chapter on the history of public shaming during our colonial period which was quite informative. He also interviewed former judge turned Texas Congressman Ted Poe, known as the King of Shame for incorporating public shaming in his sentencing of young or first time offenders.

After interviewing both Poe and one of the men he had sentence to public shaming, Ronson came away with a different perspective than he started with regarding Congressman Poe’s use of public shaming in sentencing. Not only did Poe not regret his tactics, but the young man interviewed deeply appreciated the sentence he received. It was apparent that situations where a judge in a courtroom is looking into the eye of a guilty perpetrator who had his day in court is vastly different from an anonymous Twitter mob condemning and causing irreparable harm to a stranger based on personal offense without due process.

Whether it was classes devoted to helping patients overcome secret shame or figuring out how a fortunate few weathered their public shamings relatively unscathed, there are few stones if any that Ronson left unturned. The most potent parts of the book for me however, were those specifically related to public shaming via the Internet, because this particular mechanism of public shaming is more sinister, shameful, and shameless than most. The author points out that:

“A life had been ruined. What was it for: just some social media drama? I think our natural disposition as humans is to plod along until we get old and stop. But with social media, we’ve created a stage for constant artificial high drama. Every day a new person emerges as a magnificent hero or a sickening villain. It’s all very sweeping, and not the way we actually are as people.”

Social media as community is an unnatural way of living, and so its denizens behave in  unnatural ways and react to things unnaturally. How many of us would publicly crucify a long term friend or even a loosely held acquaintance on the strength of one tactless joke or political opinion we find disagreeable? We wouldn’t, but:

“…when shamings are delivered like remotely administered drone strikes nobody needs to think about how ferocious our collective power might be.”

Feeling shame as a result of a guilty finding in a court of law or having violated the trust of an actual community of people with whom you interact day to day may be painful, but it’s born of real expectations of behavior based on reasonable measures of real accountability. Shame induced via an anonymous or semi-anonymous individual or group of individuals to whom the “shamee” has no direct connection and therefore no reasonable expectation of accountability is able to occur when the one being shamed is effectively stripped of their humanity by those feeding their emptiness through seeking to destroy another’s livelihoods and relationships.

When based on one moment of bad virtual judgment, divorced from any knowledge of the shamee’s character, it’s tantamount to doing the one thing most people in our culture would view as the cardinal sin if such action were taken against them: passing sweeping judgement and heaping condemnation on someone as a result of one mistake. Those who are able to do this and sleep at night are able to do so by engaging in an astonishing exercise in cognitive dissonance, in Ronson’s opinion:

“I suppose it’s no surprise that we feel the need to dehumanize the people we hurt—before, during, or after the hurting occurs. But it always comes as a surprise. In psychology it’s known as cognitive dissonance. It’s the idea that it feels stressful and painful for us to hold two contradictory ideas at the same time (like the idea that we’re kind people and the idea that we’ve just destroyed someone). And so to ease the pain we create illusory ways to justify our contradictory behavior.”

This is a book worth reading for anyone who spends any significant amount of time on social media. I don’t, but because I have online interaction with people I both agree and disagree with, it was good for me as well. It’s a good reminder to beware of attempts to shame anonymous individuals who are not accountable to me, my family or my church, even the most peripheral areas of my life.  That’s not what we are called to do. Live and let live is one of my life’s credos.

A few of the cases Ronson recounts are those you will easily recognize, but some aren’t. Reading about the horror and collateral damage others have suffered based on nothing more than a moment of bad judgment before pushing “post” (or even having a private joke overheard by an ill-humored SJW) is sobering reading. I used to not take the web all that seriously, but the need to exercise caution has never been more clear to me.  This one is worth a look.

4 thoughts on “So You’ve Been Publicly Shamed”