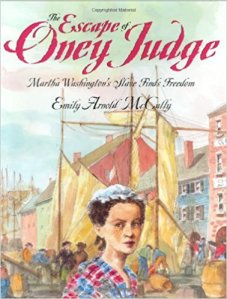 The Escape of Oney Judge is a children’s book, which as the title indicates, recounts the story of the escape of the female slave of Martha Washington, wife of founding father and first president George Washington. Oney was the daughter of an enslaved seamstress named Betsy, and an English tailor indentured servant by the name of Andrew Judge.

There are more detailed and extensive literary accounts of Oney Judge’s story, but this is the book our 9-year-old picked up from the library on a recent trip. She has written two book reviews for this blog, but this is one she wasn’t quite sure how to review, so it falls to me.

It’s a good, balanced historical children’s book. Rather than engage in hyperbole and theatrics, it reveals the complicated relationships and emotional connections that developed between slaves -particularly house slaves- and their masters and mistresses.

In Oney’s case, the realization that when all was said and done, she was still property to be bought, sold, or gifted was the impetus for her dramatic escape and time of hiding. Despite the constant dread of being found and sent back into slavery, Oney Judge decided the rewards and hardships were well worth the risk.

This is a very good book for kids between 7-10. I chose that age range based not only on reading level, which is well in hand of a literate 10-year-old, but content.

This was the 2008 Bank Street Best Children’s book of the year.

Content advisory: Nothing to be alarmed about here, but it is a story about the intersection of slavery and our country’s most beloved founding father.

3 thoughts on “The Escape of Oney Judge”