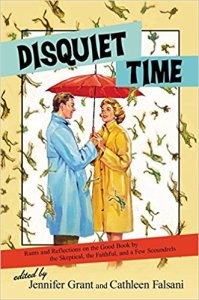 Disquiet Time: Rants and Reflections on the Good Book by the Skeptical, the Faithful, and a Few Scoundrels. Edited by Jennifer Grant and Cathleen Falsani. Originally published in 2014.

I saw this on the shelf in the library, so I picked it up and flipped through the table of contents to see if I recognized any of the authors who offered essays for this compilation of thoughts on various aspects of The Bible.

When I saw the name Steve Brown, I checked it out without giving much thought to the other authors included. I listen to Steve’s snippets on the radio, and in addition to his awesome voice (second only to Voddie Baucham and followed by Alistair Begg), I appreciate Steve’s solid but compassionate exploration of the gospel.

Being acutely aware of your imperfections makes you giddy at the prospect of new mercies every morning and a Heavenly Father slow to anger and abounding in compassion, Who knows we are but dust. Steve reminds me, since I tend to skip along the outskirts of the town of Condemnationville pretty often, not to go there.

So like I said, I checked out the book. Sigh. I’m not going to hold it against Steve Brown that his essay was parked in the middle of some of the most outlandish interpretations of Scripture I’ve ever read. However, I was sure tempted to.

After nearly every essay, I found myself whipping out my tablet to google the -often female- author of ideas that stretched the bounds of the traditional interpretations of Scripture. A few of the men were kind of sketchy, but more often than not they seemed to stick to the spirit of Scripture. What I found were pastors of liberal denominations, emergent church pastors, and all sorts of interesting biographical information that would have informed me of what was to be found if I was familiar with many of the writers. But I wasn’t.

To be fair, there were plenty of opportunites here to eat the meat and spit out the bones. As a longtime believer who is familiar with and well taught of the Scripture, it was easy enough for me to do that. The new believer, the seeker, or the person just looking for an understanding of the Bible would come away from this book fairly convinced that there is very little need for sanctification and that Scriptural interpretation is intensely personal.

I think I just described post-modern American Christianity in its entirety in one sentence.

If I am making this book sound as if I didn’t enjoy it at all, I’m not being clear enough. There were parts I enjoyed immensely, little nuggets stuck right in the middle of essays I thought were otherwise drivel. But as I said before, I can handle that, and not everyone can.

One of the most egregious essays was Debbie Blue’s exploration of her thoughts on the story of  the conflict between Hagar, found in Genesis 16. She was so postmodern (not to mention feminist) in perspective, I asked one of our daughters what she thought about Blue’s opinion. She too thought Blue was off base in the way she interpreted the story, and that was before you consider that she repeatedly painted the picture of Ishmael as a toddler (rather than a young teen) when he and Hagar were sent away from Sarah and Isaac with the promise from God that he would make Ishamel a great nation.

Because I have wearied of a church which prizes propriety over piety, and seems uttely devoid of being able to bridge the gaps between the reality of human struggling, God’s mercy, and the command for us to increase in sanctification with the understanding that we will never fully arrive this side of Paradise, I picked up this book expecting far more than I got. It wasn’t worthless, but neither was it a wealth of encouragement to grow in grace.

You can get some idea of the impetus and thrust of the editors and contributors to Disquiet Time by reading a few posts at this site dedicated to the premise of the book. A book, by the way, which you can skip.