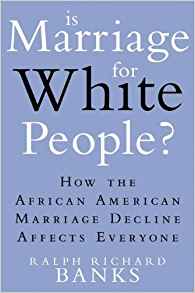 Is Marriage for White People? How the African-American Marriage Decline Affects Everyone, by Ralph Richard Banks. Originally published in 2011. 304 pages.

When I first heard of this book, I decided that the title was so preposterous there was no way I could take it seriously, and dismissed it as something I would “never” read. This, even though I was well aware that marriage rates bottomed out in the black community, including the black middle class, decades ago. I was also well aware of the standard lines which are floated when the issue comes up.

As is usually the case however, I was perusing our local library’s shelves, the book grabbed my attention, and I picked it up. Turns out that the book’s title was actually derived from an interesting set of circumstances and revealed a perspective that I was interested in reading more about, so I continued to read the book through to its conclusion.

What started out as a potential scholarly book turned about one-fourth of the way through into a book dominated by the thoughts and testimonies of single, successful black women who for various reasons either 1) had never married or had children or 2) had disastrous marriages to black men whom they had compromised on key values and standards for the sake of being married.

While Banks did a fairly decent job at the beginning of his book of providing statistics, it wasn’t long before this tome morphed into a 300 page round of, “Where have all the good black men gone?” There was far too much ink given to the voices and opinions of black women and not enough to black men. What he did have to say about black men didn’t make them look very good, either.

The fact that the highest earning black men are more than twice as likely as their white counterparts to never marry tripped a series of thoughts in me that strikes at the heart of the black relationship dilemma. The reality is, according to Banks, that the one who has the most options outside the relationship has the most power in it. In other words, successful black men wield a lot of relationship market power. Of course, the Christian ideal leaves no room for “options outside the relationship” once commitment has been made, but this is not a Christian book.

It’s enough to make you cringe because it touches on the “soft harems” which are ubiquitous among single, successful black men and many not-so-successful black men. Banks even starts off one of his chapters with this well worn joke:

5 Rules for a Happy Life

There is presently a fast-growing polygyny movement in the lower socioeconomic black community, which claims to be based on Biblical principles. In reality, it seeks to legitimize the sexual patholoogy that has torpedoed the black family over the past 60 years. Someone once suggested we look into this minister as he appeals to young black men who might be good prospects for our daughters. We’ll pass, thank you.

However, the fact that I have run across this “Pastor’s” name so often in recent years underscores how fast the movement is spreading. The men I have seen engaged in the lifestyle are largely ill-equipped to do it in any way similar to the Biblical patriarchs of old. Namely, they are broke and have their women working jobs. I don’t see how this serves black family formation. More than anything, it hastens its obliteration which is already well underway.

One of the things Banks gets right however, is that the black American community is just the beginning as lower marriage rates, higher illegitimacy, and increasing numbers of men and women of all races, whether by circumstance or choice, are eschewing marriage and procreation altogether. The rot is spreading, perhaps more slowly than in spread in the black community, but the numbers don’t lie, and Banks does an excellent job of parsing the numbers before he starts to run afield, getting distracted by the woeful tales of black women.

His  insistence that the key for successful black women is “marrying out” in order to stem the high tide of never married black women is not without merit, but it ignores the realities that come with being a high achieving woman of any race. Many look up from their years focused on accomplishment to realize she may have missed her opportunity to marry. He rightly notes, though briefly, that large numbers of black women due to the fluidity of range of attraction in the black community, hinder their ability to widen their marriage prospects by being overweight and not fully cognizant of its impact.

Despite its informative offerings, I found Banks’ book in no way encouraging to the single black women he sympathizes with so greatly, nor does it offer any incentive to the significant minority of black men who find marriage unappealing in a market where they hold all of the cards. On the contrary, it mildly chastises them for not giving their sistahs their due and doing right by them, which is not an incentive to marry.

As this relates to the Christian community, I have wondered if even those young people who love the Lord and do everything right won’t still find themselves increasingly in the situation that Jeremiah, Daniel, and the other members of the remnant who were; not spared from the fallout when the judgement for disobedience was meted out.

Grade: C. It started with a lot of potential but too quickly fell into the common trope of female sympathy without a corresponding counter-balance to get to the heart of why many marriageable black men find no appeal in the prospect of marrying black women before they hit middle age.

11 thoughts on “Is Marriage for White People?”