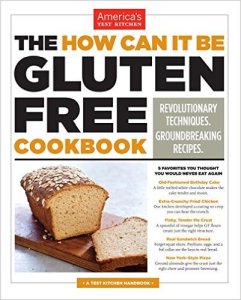 The How It Can Be Gluten Free Cookbook, by America’s Test Kitchen. Published in 2014.336 pages.

Like so many American women, I can tend to get sucked into the latest nutritional trend. The one exception to that rule has been the trend of the gluten free variety. Sure, I’ll ditch the wheat for a while to drop a few pounds, or do a Whole 30 because I really do feel better with a pared own diet.

However, I embark on these things with a general understanding that at some point I will return to my beloved gluten. After all, I am a baker, and not just a hobby baker. Well, I’m just a hobby  baker now but once upon a time I was baking enough and had built up reputation enough that I was able to hock my baking wares for a decent bit of grocery money.

I basically poo-poohed everyone who claimed to have some kind of intolerance or allergy to gluten as just a trend gone wild. Many people who claimed to be gluten intolerant couldn’t even tell you what gluten is:

Did I mention this? I like to bake, and my husband likes to eat what I bake. As such, gluten free has never been viewed as a permanent solution to anything in our house, even though managing my weight is markedly easier when I don’t eat it.

One thing however, caused us to give pause in our staunchly pro-gluten household: our youngest daughter’s health. Eight-year-old has been battling eczema to varying degrees since she was born. Recently we began -again- the process of eliminating things from her diet systematically and chronicling the results. Benevolent Dictator decided that for the months of November and December, we would eliminate gluten.

For the sake of her comfort, the dictator and I join our daughter in whatever is being eliminated from her diet. Rather than see this as the end of baking (it’s the holidays after all!) I saw it as a challenge. If there was anywhere I knew I would find excellent gluten free substitutions for our favorite baked goods, it would be from America’s test Kitchen.

If you’re not familiar with America’s Test Kitchen and you love the science of cooking and baking techniques, this is a show you want to watch. I watch them on PBS, and they test every conceivable technique, test and review kitchen and food products, and go to great lengths to get the best possible results. And they produced a gluten free cookbook! Two volumes!

We mastered the art of producing cakes that are hardly distinguishable from its gluten filled counterpart, but bread was the one thing I was hesitant to try until I fund this book. Well, until my daughter found this book. I started with the hamburger rolls which tasted divine. Our entire family enjoyed them and the verdict was that you could hardly tell the difference between regular hamburger buns and the GF variety I made using the recipe from the book.

Next up was the pull apart dinner rolls, which again, were a home run. I considered making at least one more recipe (English muffins) before offering a review of the book but I have owned a couple of ATK cook books and I can’t think of one bad recipe I’ve made from one of them.

Like all ATK books, there are lots of insights on the science behind the techniques they chose and reviews of different products. This was helpful since there are so many gluten free flours and products available on the market today.They always accompany the most involved steps with photographs. There are also comparison photos to show the different results they got with different flour blends. So much information can be found within the pages of these volumes that even the most inexperienced baker could embark on gluten free baking and have success.

Since it appears at this juncture, that eight-year-old is actually seeing some improvement as a result of this particular elimination, this might be our life for the foreseeable. It was great to stumble onto a book with such a wealth of information and guidance.

5 thoughts on “The How It Can Be Gluten Free Cookbook”