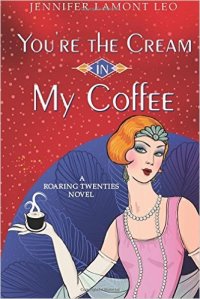 You’re the Cream in My Coffee: A Roaring Twenties Novel, by Jennifer Lamont Leo. Published on September 15, 2016.

This is one of those instances where I eat my words and walk back a resolution concerning two genres.  The first is Christian fiction. The second is romance novels. This book falls definitively in the former camp and leans heavily into the latter.

I am far from alone in my trepidation when approaching the genre. You don’t have to look far to find page upon page of critiques of Christian fiction, and Christian romance in particular. This blogger offers a pretty comprehensive list of 8 things that can and often do go wrong with Christian fiction.

However, when a friend is published (and I consider longtime e-friends friends), you buy their books. You give them the press you would deeply desire that they give you, even when they write a genre that you’re a little skeptical about. After that, you pray that it is as good a tome as you hope it is. Fortunately, Jennifer does an admirable job of missing most of the landmines in that list of problems with Christian fiction.

Jennifer takes her readers on a journey with Marjorie Corrigan, oldest daughter of her widowed father and difficult stepmother in the fictional town of Kerryville, Illinois in the wake of WWI and during the years of prohibition. As the story opens Marjorie is 26 and engaged to be married to a well respected young doctor in the town. She is fond of him,  feels quite fortunate, and has resolved to be a good wife, even if she never feels the depth of love for him that she felt for her first love when she was just a girl of sixteen. Jack, her first love, was presumed to have died in The Great War.

With two months left until her wedding to Richard, Marjorie’s feet turn to ice. The lack of passion she feels for Richard alarms her. In addition to her wedding panic, she is experiencing fainting spells at the most inopportune times, causing rumors to swirl around her small town.

She heads to the Windy City to have some tests run on her heart, but the problem doesn’t lie with her physical heart and she decides to stay in Chicago for a time of respite and freedom before her upcoming nuptials, much to the chagrin of her fiance and stepmother.It is during her summer in Chicago that Marjorie gains clarity while simultaneously stumbling into more and more ways to complicate her life.

That’s as much of a spoiler as I want to give away. You can get a few more hints about the trajectory of the story from the Amazon teaser.

As far as Christian fiction goes, this is one of the better books I have read of the genre, which I summarily dismissed several years ago as a dead end literary road. Jennifer manages to infuse faith into the book without being overly preachy (at least most of the time), her characters have layers, and her story has a depth often missing from modern Christian books which focus on romance.

I like that the book is set in the 1920’s and that even though it has some modern themes running through it, the propriety of the times shines through without the pretense of perfect people living perfect lives. The 20’s were after all, probably as much of an influence on the modern morality shift as were the 60’s.  Jennifer does will with showcasing that reality and the realities of city life during the tumultuous period after the first world war.

Because I had sworn off Christian fiction while still reading the occasional bit of fiction where Christianity flowed as a a positive undercurrent, it was a bit of an adjustment to reacquaint myself with a story where the characters openly witnessed to, discussed Bible verses with and offered prayer between one another. I usually find it trite, formulaic, and frankly, annoying. In this case it was always well infused into the story line, so I was able to make the adjustment. The characters’ struggles with faith were more realistic, less formulaic and  less flaky than what I have read in previous Christian fiction.

Jennifer does an admirable job with this book. I’m still not sold on Christian fiction as a genre, but it was a relief to read a well written Christian novel whose characters inspired me to want to read on to the end to see how their stories panned out.

Content advisory: This is a very clean book. There are references to alcoholism, the organized crime associated with prohibition, and the trauma many soldiers were left with after the war.

5 thoughts on “You’re the Cream In My Coffee”