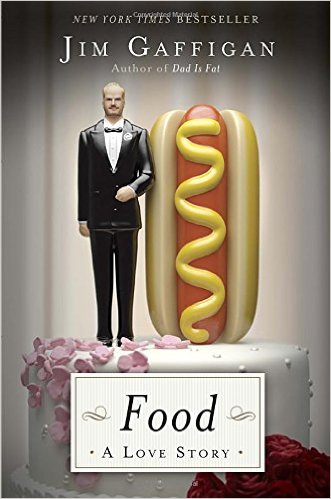 I can honestly and unequivocally say that if you asked me for a genre of book I thought I would never, ever, be bothered to read, I’d probably say one like this: written by a modern day stand up American comedian. I have no idea what possessed me to grab this off the featured shelf of our library on my way to check-out kiosk. Something about the photo made me snicker, curiosity got the better of me, and my state of mind this holiday season demanded that I read something that might make me laugh.

At least I hoped it would make me laugh, and thankfully, there were several moments as I read this book that literally made me laugh out loud. I read portions to members of our foodie household. The funny parts were so funny that I was able to forgive Mr. Gaffigan for the parts that were patently UN-funny.

This is not high brow, not excellent writing, and book snobs need not even bother to crack the cover. I generally consider myself a book snob, but I’m prole enough to be able to kick back and laugh with someone as low brow as I am. I’m not going to even try and discuss this book from a literary perspective because that would mean pretending that it’s literary. The fact that Gaffigan keeps making the best seller list with these books says as much about American reading habits as his books reveal about American eating habits.

So rather than go any further, I’ll just put up some funny quotes:

It would be embarrassing trying to explain what an appetizer is to someone from a starving country. “Yeah, the appetizer—that’s the food we eat before we have our food. No, no, you’re thinking of dessert—that’s food we have after we have our food. We eat tons of food. Sometimes there’s so much we just stick it in a bag and bring it home. Then we throw it out the next day. Maybe give it to the dog.

In America we have gone way beyond sustenance. Eating is an activity.

Gaffigan’s wife is a devout Catholic, who is also thin and pretty (nothing like him) and his five kids are very cute. This irony prefaces a few jokes in the book. This is when reached a point in his life when he decided to stop trying to get into shape, and embrace his reality:

It wasn’t defeat as much as it was acceptance. I figured, I got a hot wife. If she leaves me for getting fat, that means she’s shallow.

On trusting a skinny person’s word on what tastes (or doesn’t taste) good:

I’d still trust an overly fat person over a skinny one any day. The best adviser would have a very specific body type: pudgy or just a little overweight. This makes it clear they have a somewhat unhealthy relationship with food, but not a clinical problem.If they are morbidly obese, then you can conclude that they will probably eat everything and anything and do not have discerning taste.

My favorite part was probably his exploration of how dumb we have to be to have made bottled water into a multi-billion dollar industry. He even notes that Evian is “naive” spelled backwards, which I somehow never noticed.

Recently I tried Smartwater, which has electrolytes in it, and it’s supposed to replenish your body better than regular bottled water, therefore making you, I guess, smarter. I tried it, and it totally worked. I am now much smarter. Now I only drink tap water.

On second thought, that wasn’t my favorite part. It was this section, which I am going to end with along with an embarrassing confession. Me and my daughters? We are these people. My Benevolent Dictator thinks we are nuts:

Foodies will travel for miles in search of the perfect hamburger. “There is this place in Greenpoint that’s only an hour by train and a forty-minute walk from the subway that has the best burger in town!” It can’t be better than the burger I can get across the street. Mostly, I just want the closest best burger in town.

Yep, we drive for a great…whatever. We even got excited about trying a new local vegan donut shop and we’re as far from vegan as you can get.

Like I said, I laughed, which was the whole point. This book was basically a 300+ page stand up act, with all this implies: Some great hits, and some big misses.

For me, out of book snob mode: Solid B+

Content advisory: The occasional four letter word here and there, but very rare.