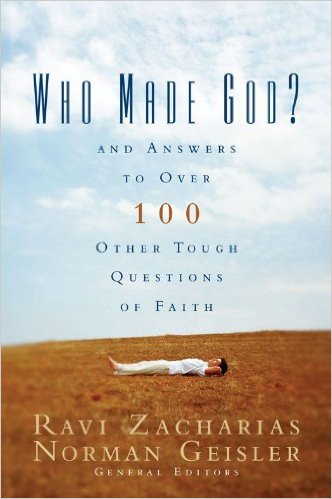 Who Made God?: And Answers to Over 100 Other Tough Questions of Faith, edited by Ravi Zacharas and Norman Geisler. Originally published in 2009.

I once lamented to my friend Jo that there seems today to be no great apologists along the lines of Lewis, Chesterton, or Bonhoeffer.She asked if I was familiar with Ravi Zacharias, and handed me this book. While I had certainly heard the name, I was not very familiar with his work. I am now however, having watched several of his videos in the time since she and I had our conversation nearly 6 months ago.

After reading through this book, I am heartened that there are thoughtful Christian philosophers still to be found in this age where drivel best-selling drivel such as Your Best Life Now is what passes for profound among the rank and file in the pews. It answers questions commonly asked by those who are determined to view Christianity as a faith of religious fairy tales and moralistic dogma.

Who Made God lacks the poetic flow of Lewis or Chesterton, but given the age in which we live, it gets the job done admirably. It offers answers to questions such as: If God is good, why is there evil in the world?

In view of Scriptural facts, we may conclude that God’s plan had the potential for evil when he bestowed upon humans the freedom of choice, but the actual origin of evil came as a result of a man who directed his will away from God and towards his own selfish desires. Norman Geisler and Jeff Amanu wrote, “Whereas God created the fact of freedom, human perform the acts of freedom. God made evil possible; creatures make it actual.”

The book is actually a collection of answers to various question posed to numerous theologians, with Zacharias and Geisler executing the editing and compilation as well as answering some of the questions. This made for a difference of tone depending on the category, which I found a positive rather than a negative point of note.

Who Made God leaves virtually no theological stone unturned. There were many topics at the beginning of the book that I was well versed in. As I moved towards the later chapters however, there were answers to questions I had never given deep consideration to. Such as:

There are intriguing questions and answers in Who Made God.