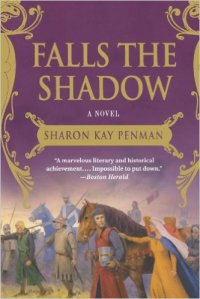 Falls the Shadow, by Sharon Kay Penman. Originally published in 1988, this is the second installment of Penman’s Welsh Prince trilogy, and largely explores the story of Simon de Montfort, a French nobleman who led a revolt against King Henry III of England.

If you’re like me, you may wonder why this book in which Welsh princes are minor characters are a part of the Welsh prince trilogy. Never to worry, however. Although the Welsh princes’ ongoing saga with the English crown are periphery in this installment, their presence is relevant and the daughter of Simon de Montfort plays a major role in the final years of Welsh/English conflict and the conclusive end of Wales as an independent nation.

This is, without hesitation or contemplation, my favorite of the three books because Simon de Montfort is my favorite of the heroes featured in the trilogy. Born with noble title but little means and more than enough confidence, he worked his way up through political savvy and determination into a place of prominence. As this novel is historical fiction, a quick bit of research supports Penman in her presentation of the 6th Earl of Leicester. She treats us to a captivating hero and the story is engrossing.

Her interpretation of De Montfort’s clandestine and fruitful marriage to Eleanor, daughter of England’s King John, is sweet and poignant but without being overly romantic and sappy. Eleanor, unlike Joanna of Here Be Dragons, has no conflicting emotions or split loyalties. She is on Simon’s side, in every aspect, every step of the way. This made for a better story, at least from my point of view. I don’t like female characters (or real life women for that matter) who haven’t grasped the conclusion of the matter on loyalty to their husband. Eleanor is my favorite heroine of the three trilogies as well.

Whereas Here Be Dragons was anchored by a great love story, Falls the Shadow moves along on the strength of political intrigue and war. Simon is a great warrior, another endearing trait, and whatever one thinks about his allegiance with the regional barons to revolt against the king in favor of reform, Penman gives us the picture of a man at peace with his God, his conscience and the merits of his crusade.

There is lots of war and death and gruesomeness in Falls the Shadow, right up until Simon meets his violent end, complete with dismemberment by the royalists against whom he fought.

There are a few sections which include sexual intimacy between Simon and Eleanor, but nowhere near as much as was contained in Here Be Dragons. Graphic content in this second installment is centered on the frequent clashing on the field of battle, and there is plenty of that.