That’s actually not the title of a book I’ve recently read. It’s the combined titles of two books on the same subject. I concluded that rather than review the books separately, I’d combine them into a one post review. That said, the combination of these two titles is a very succinct and accurate description of the takeaway you’ll get from reading either of these two books on the politics of race in the U.S.

Please Stop Helping Us, by Jason Riley  is an excellent rebuttal to the nonsense we are being treated to in the media when it comes to race relations and what ails the black community. Pulling no punches on the issues of crime (black on black as well as black on white), family breakdown, educational shortcomings, and the lot of it, it’s the kind of book I wish I could put into the hands of every one I know who staunchly supports our current Demagogue-in-Chief.

In addition, Riley puts the current woes and dismal statistics of the black community into a relevant historical context, something that is sorely needed as commentators on both sides of the debate fail to recognize or acknowledge prior evidence that given the opportunity to sink or swim without weights or life rafts, black Americans have usually done just fine.

Riley highlights the fact that contrary to post modern popular opinion, at the beginning of the civil rights movement American blacks were fairly fractured in terms of what it would take to improve their lot as Jim Crow fell out of legal favor. There was the Booker T. Washington school of thought, which focused on self-determination and industry as much more important than integration or political activism.

(There will be reviews forthcoming of Booker T. Washington’s work as our President uses him as a favorite example of thinking the black community should ignore in favor of government as the benevolent savior to all who are “oppressed”.)

There was also the W.E.B. Dubois faction which focused on political power and influence as the chief end to achieve equality and prosperity. Riley points out what happened as those who emphasized political integration won the battle:

Since the 1960s, however, and beginning in earnest in the 1960s, the Du Bois-backed focus of political integration has prevailed among black civil rights leaders. It crystalized under Martin Luther King, and several generations of blacks have come to believe that the only legitimate means of group progress is political agita­tion of the NAACP-Jesse Jackson-Al Sharpton variety. By this way of thinking, if you are more interested in black self-development than in keeping whites on the defensive, you’re accommodating racism.

You can find a much longer excerpt of Riley’s exposition on the Washington vs. Dubois approach to civil rights in this excerpt from his book that was featured on Forbes.com. Thorough, conservative and historically detailed book. 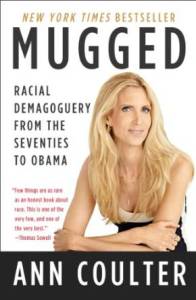 Mugged, Racial Demagoguery from the Seventies to Obama, by Ann Coulter does a good job of stating those things that no one else wants to say in polite company. The difference here is that again, she offers some historical context that shines a light on the fallacies and biases that both sides of these discussions fail to recognize or even know about.

Offering a very extensive record of crime statistics of various stripes, she points out that the proliferation of pandering and soft on crime legislation has led to a situation where we all are at greater risk of crime. This is why when I decided to combine the reviews for these two books of very similar subject, I went with “Please stop helping us get mugged.”

I wanted to like this book. I truly did. The problem with it was not the information contained within. There were plenty of convincing arguments backed up with historical references and legal facts. I appreciated this.

What I did not appreciate was the way Coulter’s quip-like humor and characteristic one liners translated into book form. What plays well in a 5 minute television debate or reads well in a 2000 word column on Townhall.com grows tiresome after about 75 pages:

The century-long struggle for civil rights was over. Attorney Thurgood Marshall had won his cases before the Supreme Court. President Eisenhower made clear he was willing to deploy the U.S. military to enforce those victories. President Nixon had desegregated the schools and building trades. Racist lunatic-and Democrat-Eugene “Bull” Connor was voted out of office by the good people of Birmingham, Alabama. The world had changed so much that even a majority of Democrats were at last supporting civil rights. After nearly a century of Republicans fighting for civil rights against Democratic segregationists, it was over.

That was the precise moment when liberals decided it was time to come out strongly against race discrimination.

For the next two decades liberals engaged in a ritualistic reenactment of the struggle for civil rights-long after it had any relevance to what was happening in the world. Their obsession with race was weirdly disconnected from actual causes and plausible remedies. They simply insisted on staging virtual Halloween dress-up parties, in which some people were designated “racists,” others “victims of racist violence” and themselves, “saviors of black America.”

The fact that New York City was the crucible of so much racial agitation in the seventies and eighties shows how phony it was. There was never any public segregation in New York. No one was moved to the back of the bus. There were no “whites only” water fountains. There were no segregated lunch counters. (Blacks could even get a sixteen-ounce soda in New York City back then!) But liberals love to drape themselves in decades-old glories they had nothing to do with.

You may have noticed the little one liners I referenced above. As I said, great for a 2000 word column, but tiresome over 300+ pages.

With those caveats in place, the book is worth a read to die hard Coulter fans and the open minded on both sides of the current debate on race in America. You have to be open minded, however because no matter where you fall, there will no doubt be something here that you’ll not like. It is however, far more offensive to the liberal than conservative (and I use those terms loosely as a way to generally distinguish two schools of thought that grow less dichotomous every day).

That brings to mind  another bothersome thing about Mugged. There was an over emphasis on framing everything in terms of Republicans and Democrats, liberals and conservatives. Now, given Coulter’s target audience, this is to be expected and I won’t hold it against her. Having myself evolved in recent years past the two simplistic and misleading labels, it was another thing that dragged down a potentially helpful book.

2 thoughts on “Please Stop Helping Us Get Mugged.”